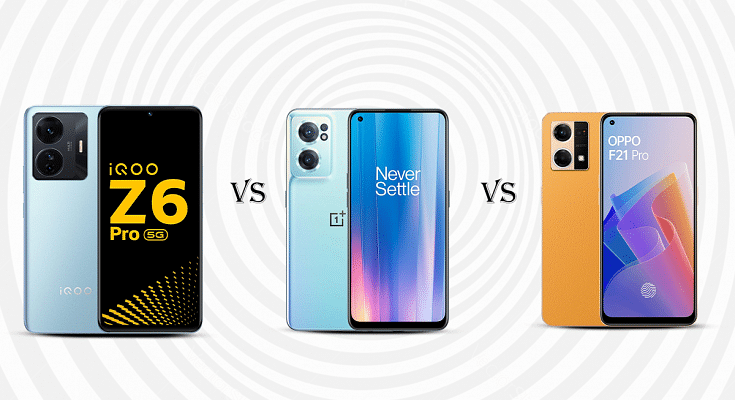 After the introduction of 5G-ready smartphones in the market, multiple smartphone OEMs have flooded the market with mid-range and affordable 5G-ready phones. iQOO, Oppo, and OnePlus have been amongst the top contenders for offering such future-ready smartphones at cheaper rates. Today we are going to carry out a comparison of the iQOO Z6 Pro 5G, OnePlus Nord CE 2 5G, and Oppo F21s Pro are currently the trending mid-range 5G smartphones in India. All three smartphones offer advanced hardware and flagship performance. We have compared their key aspects below:

The iQOO Z6 Pro 5G features a massive 6.44-inch screen which is  an AMOLED panel. It has an impressive resolution of 2404 × 1080 pixels  which ensures an immersive visual experience. Moreover, it has a refresh rate of  90Hz for fluid scrolling and frame transition with graphics extensive games and  videos.

The OnePlus Nord CE 2 5G also ensures crisp visuals with its 6.4-inch fluid AMOLED display. This premium mid-range OnePlus Nord CE series offers and has a screen resolution of 2400 x 1080 pixels. It also has a refresh rate of 90Hz similar to the iQOO Z6 Pro 5G and a pixel density of 409ppi.

The iQOO Z6 Pro 5G operates on the efficient Snapdragon 778G 5G chipset. It is available in three variants 6GB RAM with 128GB of ROM, 8GB RAM with 64GB ROM, and 12GB RAM with 128GB of ROM. On the other hand, the OnePlus Nord CE 2 5G houses the MediaTek Dimensity 900 processor, which is also an octa-core chipset for premium mid-range phones. It is available in two variants, the first one comprises 6GB RAM and the second one comprises 8GB RAM, both with 128GB of internal storage. Both this mid-range  Android phones also come with expandable microSD card support for extra storage requirements.

The Oppo F21s Pro operates on the Qualcomm Snapdragon 695 processor with an octa-core CPU architecture. It is available in only one variant, which has 8GB RAM and 128GB native storage capacity of ROM.

The iQOO Z6 Pro 5G ranks higher than the other two smartphones in terms of processing power; thanks to its powerful Snapdragon 778G chipset. The Nord CE 2 and the OPPO F21s Pro follows.

The iQOO Z6 Pro 5G features a 4700mAh battery, which comes with 66W fast charging support. It can instantly charge the smartphone to 50 percent in just 18 minutes (as periQOO). It has plenty of battery life which can easily get you throughout the day.

The OnePlus Nord CE 2 5G is equipped with a slightly smaller 4500mAh battery and is accompanied by a 65W SUPERVOOC fast charger. As per the company’s claims, the battery on the Nord CE is quite reliable and can be fuelled up to full within just 30 minutes.

On the other hand, the Oppo F21s Pro 5G houses a 4500mAh battery, which is accompanied by a 33W SUPERVOOC charger. It can get completely charged within an hour.

When compared, the iQOO Z6 Pro 5G delivers top performance in the battery at the top of its game. Since it features a slightly bigger battery and faster quick charging speed. However, the OnePlus Nord CE 2 5G offers a faster-charging speed and doesn’t fall behind with its flagship 65W SUPERVOOC charger.

The iQOO Z6 Pro 5G is equipped with a powerful set of cameras, which includes a 64MP + 8MP wide-angle + 2MP macro camera. Apart from that, the smartphone also has a 16MP front camera, which captures good portraits and selfies. It also offers multiple modes to choose from, which include night mode, dedicated 64MP shots, portrait, panorama, HDR, AI stickers, time-lapse, and slow-motion.

The Oppo F21s Pro also possesses a triple camera setup, which includes a 64MP the primary camera, a 2MP macro camera, and a 2MP mono camera. It is equipped with a 32MP front camera, which captures stunning selfies with great detail.

Overall, the iQOO Z6 Pro 5G and OnePlus Nord CE 2 5G feature the same camera specification and capture high-quality shots. On the other hand, the 32MP  front camera that Oppo F21s Pro features gives it an upper hand over the other two in the selfie camera department.

Which One To Choose?

Overall, all three smartphones have similar specifications in all spheres but after analyzing all the key aspects, the iQOO Z6 Pro 5G comes out to be the top performer. It has a wider screen, a bigger battery, and a higher resolution display. Moreover, it also offers multiple variants to choose from with different RAM and storage combinations. However, the OnePlus Nord CE 2 5G isn’t lagging behind and gives equally tough competition to the iQOO Z6 Pro 5G. The Oppo F21s Pro has better selfie camera hardware.