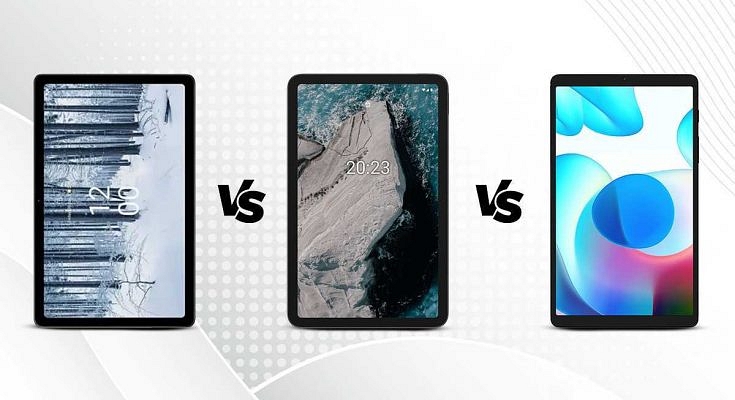 HMD Global just added a new budget mobile tablet to its product portfolio. The brand has now released the successor of the Nokia T20 which was released earlier this year. The Nokia T21 is the latest tablet model from the Finnish tech giant that has arrived in the international market. It borrows some of the features from its precursor such as the display and camera. Both these Nokia tablets have emerged as the best option for budget audiences.

But we have a bunch of tablets from other brands that make for a good fit when you have a tight budget. The Realme Pad Mini is one of the models that has been topping the charts in the affordable tablet market. We are doing a quick comparison between all these three tablets that will eliminate all your confusion related to a new purchase.

HMD Global has used an IPS LCD screen on both Nokia T20 and the Nokia T21 but has used a different screen size for both variants. The latest model, i.e., the Nokia T21 features a 10.36-inch display which has a 2K screen resolution of 1200 x 2000 pixels.

The brand has used a toughened glass material and has support for Widevine L1 which enables HD video playback on Netflix. The panel has SGS low blue light certification and 400 nits peak brightness that aids with clear visibility outdoors.

If the display is your primary requirement, consider the Nokia T20 or the Nokia T21 as the options. This is because you get a larger panel along with a better screen resolution.

The camera hardware, specifically, the rear snapper is the same on all three tablets. The Nokia T20, Nokia T21, and the Realme Pad Mini sport an 8MP camera at the back that can capture some decent level of clarity with the captured shots along with balanced colors. This is a basic camera setup that is common across budget Android tablets.

Nokia has used an entry-level Unisoc processor in both of these tablets. Realme also has opted for a Unisoc series processor to power the Pad Mini. The Nokia T21 runs on the octa-core Unisoc T612 chipset, while the Nokia T20 has the Unisoc T610 processor. On the other hand, the Realme Pad Mini has the Unisoc T616 processor which is slightly more powerful compared to the remaining two processors.

All three tablets in this list are decent in terms of features and performance. You wouldn’t find differences in terms of power delivery from these three tablets. If we take a look at the overall spec sheet, the Nokia T21 has the least compromises. But currently, this tablet is not launched in India, therefore opting for either the Nokia T20 or the Realme Pad Mini makes more sense.