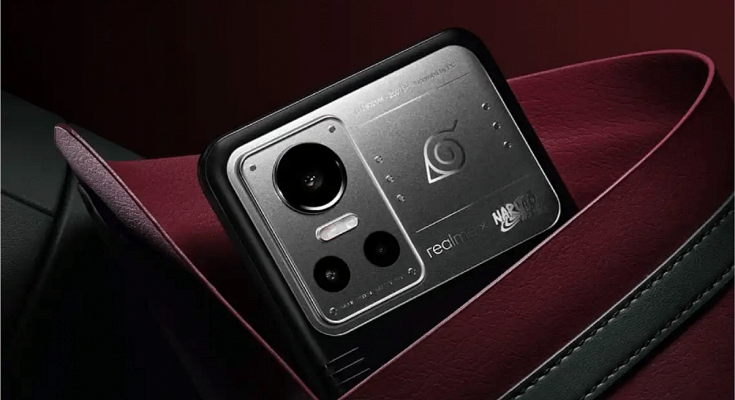 Realme is rapidly expanding its flagship GT smartphone series with new products. The Realme GT Neo 3 arrived as the newest member of the company’s premium smartphone lineup in India as well as the remaining global markets. But now, Realme is soon going to introduce another GT Neo 3 model. This time a special edition model for which Realme is well-known in the market. The upcoming model is the Realme GT Neo 3 Naruto Edition which has been teased officially. What all changes will the special Edition GT Neo 3 will bring to the table? Below are the details:

The teaser poster also reveals the new design theme that the upcoming special Edition Naruto series phone will offer. The design language is similar to the standard GT Neo 3, but the skin is different. Realme has used new color tones for this special edition variant with Ninja-theme of the Naruto manga anime.

The Naruto branding will be inscribed at the bottom right of the large camera module covering the top segment of the phone. Notably, the camera module is also designed differently with a greyish metallic finish. In addition to the changed design language, the new GT Neo 3 special edition phone is said to ship with Naruto-inspired accessories as well. We might see a custom Naruto Edition GT Neo 3 retail box with charging accessories included.

Realme has not yet confirmed its plans to launch the GT Neo 3 Naruto Edition in India and other markets. We have not received any information from Realme or any other source giving an expected launch timeline for the special edition GT Neo 3’s global launch. But we are looking out for updates and will keep you posted with all the developments.

Realme GT Neo 3 Naruto Edition Specifications: How Different Are The Features Compared To The Standard Model?

The Realme GT Neo 3 Naruto Edition is expected to launch with identical hardware specifications as the standard GT Neo 3. This means the GT Neo 3 Naruto Edition will also be driven by the octa-core Dimensity 8100 processor paired with up to 12GB RAM. This special Edition GT Neo 3 might offer up to 256GB storage configuration and ship with an Android 12-based Realme UI custom interface.

The Realme GT Neo 3 Naruto Edition will also likely flaunt a 6.7-inch AMOLED screen. It will have 1080p FHD+ screen resolution and 120Hz refresh rate. The camera specifications will also be the same including a 50MP triple rear camera module and a 16MP selfie camera. We might also see the same 4,500 mAh battery unit along with fast charging support.