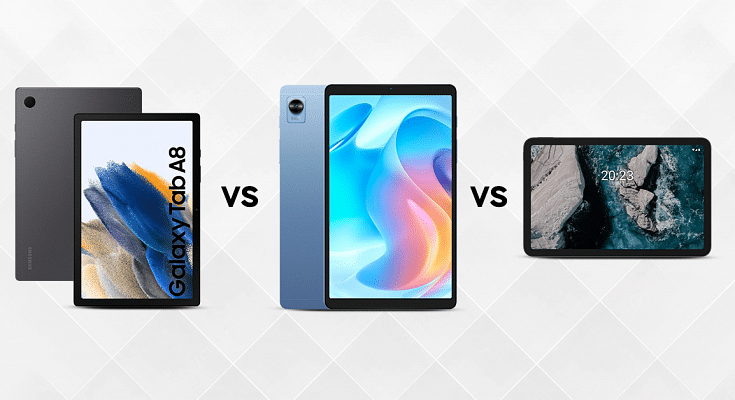 Tablets have become one of the top preferences for entertainment and professional work. The latest generation Android and iOS tablets assure you of a rich visual experience and powerful day-to-day performance. Realme has been one of the top choices for its premium yet affordable smartphones and tablet models at inexpensive prices. Samsung and Nokia have also emerged as close competitors in the tablet market. Therefore, today we are going to compare three popular budget tablets from these brands. We are pitting down the Samsung Galaxy Tab A8 against the Realme Pad Mini and the Nokia T20.

Table Of Contents hide
1 Display Specifications
2 Chipset Comparison
3 Camera Features
4 Battery and Fast Charging
5 Which One Should You Choose?

The Nokia T20 has a massive screen that measures10.4-inches and is an LCD panel. The display on this budget Nokia tablet operates on a 2K resolution of 1200 x 2000 pixels. It has a maximum brightness of 400nits with which it offers better sunlight visibility compared to the other two models.

Overall, the Nokia T20 offers better display performance than the rest of the two, it has higher brightness levels along with a 2K resolution.

The Samsung Galaxy Tab A8 operates on the Unisoc Tiger T618 processor with an octa-core CPU cluster design. It is available in three different variants 4GB with 64GB and 128GB of internal storage, and 3GB RAM + 32GB storage. Also, the variants are also available in LTE and Wi-Fi models. It additionally supports expandable memory of up to 1TB via an external microSD card.

The Realme Pad Mini houses the Unisoc T616 octa-core chipset. This is a budget mobile processor for Android smartphones and tablets. The Realme Pad Mini ships with 3GB RAM and 32GB storage, which can be expanded up to 1TB via a microSD card slot.

The Nokia T20 operates on the Unisoc T610 which is also an octa-core chipset for entry level devices. The Nokia T20 is available in three variants, which includes 3GB RAM with 32GB storage and 4GB of RAM along with 64GB of onboard storage. It also has an expandable memory of up to 512GB via a microSD card slot.

Overall, all three tablets in this list will offer a similar user experience with all tasks with their entry-level Unisoc chipsets.

Overall, all three tablets feature the same camera specifications and are good for general photography.

The Samsung Galaxy Tab A8 features a 7040mAh non-removable battery. It is accompanied by a 15W charger, which takes about four hours to refuel it from zero to 100 percent.

The Realme Pad Mini has a 6400mAh battery and can be completely charged in a little less than three hours via the 18W charger. One single charge can support up to 15.8 hours of video streaming.

The Nokia T20 has a huge 8200mAh battery, which comes with an a10W fast charger, and can be fuelled up to full within three hours.

In terms of battery life, the Realme Pad Mini offers a long battery life and charges faster than the other two.

Which One Should You Choose?

After considering all of their key aspects, we have come to the conclusion that all three tablets offer almost similar specifications. However, the Nokia T20 has an upper hand in the display department, the Samsung Galaxy Tab A8 has a better chipset and Realme is better in the charging category.