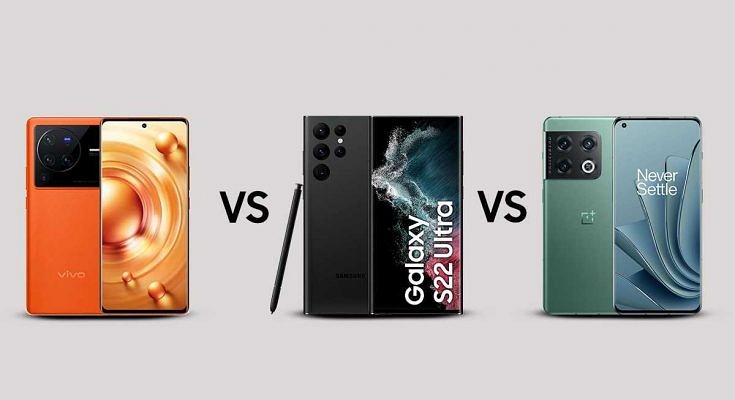 The war of camera flagships is on and we have the latest flagship phones packed with high-grade camera hardware that can give professional cameras a hard run for the money. One of the recent Android smartphones with a high-end camera is the Vivo X80 Pro. Vivo has launched the X80 Pro with a flagship ZEISS series camera module. The Vivo X80 Pro is one of the strongest contenders in the flagship camera smartphone race that competes against the Galaxy S22 Ultra and the OnePlus 10 Pro. But which is the three premium phones is an all-rounder when we speak of price to specs ratio? In this comparison article, we are breaking down for you in this comparison article:

The display game is strongest on all three flagship phones. Starting with the Vivo X80 Pro, it offers a 6.78-inch display which is an LTPO3 AMOLED panel that supports an QHD+ screen resolution of 1440 x 3200 pixels. The Vivo X80 Pro’s display also supports HDR10+ certification and a 120Hz refresh rate for a better video watching experience on OTT platforms and also gaming experience. The Vivo flagship phones also support 1500 nits peak brightness level that makes the panel visible under direct sunlight.

The Samsung Galaxy S22 Ultra also features a top-notch display panel. It is a 6.8-inch Dynamic AMOLED screen that supports a QHD+ screen resolution of 1440 x 3088 pixels and a 120Hz refresh rate. It is the brightest panel amongst all with the 1750 nits peak brightness levels.

The OnePlus 10 Pro also has a high-resolution LTPO2 display where the screen measures 6.7-inches. It is the smallest panel out of all three flagships Android phones. The specifications are almost identical as the remaining two models such as a QHD+ screen resolution and HDR10+ certification. The OnePlus 10 Pro’s brightness is also decent with 1300 nits peak brightness levels.

All three Vivo, Samsung, and OnePlus phones are aimed to please shutterbugs. The Vivo X80 Pro brings Zeiss series cameras where the back panel is packed with quad sensors comprising a 50MP main lens that has an f/1.6 aperture with PDAF (Phase Detection Autofocus), Laser AF, and OIS support. The main camera is accompanied by an 8MP periscope lens with 5x optical zoom, a 12MP telephoto sensor with a gimbal OIS, 2X optical zoom, and Dual Pixel PDAF. The Vivo X80 Pro’s last camera sensor is a 48MP ultrawide lens with an f/2.2 aperture.

The Samsung Galaxy S22 Ultra also has the best-in-class camera hardware. It features a massive 108MP main selfie snapper that supports Laser AF, OIS, and PDAF. It is accompanied by a 10MP periscope lens that has 10x optical zoom capabilities and a 12MP ultrawide sensor that features 120-degree FoV.

The OnePlus 10 Pro 5G also has capable camera hardware as the remaining two models. The primary rear camera on the OnePlus 10 Pro is a 48MP lens with Laser AF, OIS, and PDAF (Phase Detection Autofocus). The main sensor is clubbed with an 8MP telephoto sensor with 3.3x optical zoom and a 50MP ultrawide sensor with an f/2.2 aperture.