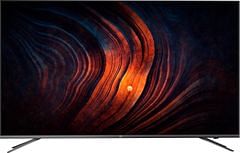 4.75
Bringing value to the World of television

The OnePlus TV Q1 series is impressive and demanding for its features. It is available with a price range starting at. 69,999. It is very affordable as compared to it’s qualities .The company's new televisions for 2020 aren't replacements for the OnePlus TV Q1 series at all; they are more affordable TVs that will appeal to more value-conscious buyers. The company has now launched ONEPLUS HD 4K Smart LED TV with the latter being the most affordable, meant for budget smart TV buyers. There's a single 55-inch model in this series for now – the OnePlus TV 55U1 4K LED Android TV. Priced at Rs. 49,999. It is significantly more affordable than the OnePlus TV 55Q1 because of the more cost-efficient LED-backlit LCD screen.

Additionally this  television promises everything that you'd get with the OnePlus TV Q1 series, along with various software tweaks and improvements that have been released since that model was first launched. The new OnePlus TV U Series (55U1) is a good option to consider if you're looking for a not-so-expensive big-screen 4K HDR TV.

As far as connectivity is concerned, it comes up with Ethernet, Smart tv, Wi fi, Bluetooth, Internet access in remote.

Browse the OnePlus 55U1 55-inch Ultra HD 4K Smart LED TV detailed specifications and features below to clear all of your doubts.

The 4K Smart LED TV does have some flaws naturally but has very good performance.

It has a bezel-less design with approximately  95% screen .It has thin body design and this LED TV offers excellent and amazing realism .It has fine design and body detail .It’s slim body is made up of metal which makes it look more stylish. It has dimensions 1225.5mm × 71mm and is very light weighted (16.64kg).

The OnePlus TV Q1 series is quite radical in terms of design and has a  carbon-fibre-like texture at the back and somewhat controversial stand. With the OnePlus TV 55U1, things have changed a bit. The television is just 6.9mm thick at the top and sides and has an aluminium body. The borders around the screen are slim, with a small OnePlus logo just below the screen that's barely noticeable unless you're right in front of it. The screen-to-body ratio is an impressive 95 percent, and this makes the TV look incredible from all angles.

It's also rather heavy for a 55-inch TV because of the premium materials used. From the front, the 55U1 closely resembles the OnePlus TV Q1, and has rear-positioned speakers, while the power button is at the bottom near the lower-right corner.

The texture shows incredible premium material used in it. Affordable product with good quality at ease.

Bringing value to the World of television

Have a question in your mind about OnePlus 55U1 55-inch Ultra HD 4K Smart LED TV?

This TV is best in this price range in terms of quality, sound is sufficient, no need to use the external speaker for the sound

The colour reproduction is adequate, and there are numerous options for calibrating the colours, so it was satisfactory in that regard.

This LED Smart TV has 360 degree surround sound with a three dimensional effect and not required additional setup, and its operating system based on Android.

It has a very appealing appearance.All the features are advanced and nice. It has a beautiful and stunning 4k clarity. Slim and elegant in appearance, with a single click, you can share photos from your phone with the TV.

Q. What is the screen resolution of OnePlus 55U1 55-inch Ultra HD 4K Smart LED TV?

Q. What are some of the best alternatives available for OnePlus 55U1 55-inch Ultra HD 4K Smart LED TV?

Q. What is the Power Consumption of OnePlus 55U1 55-inch Ultra HD 4K Smart LED TV?

This Model consumes power of 165 w.