So, these days everyone wants a fast phone that has a long battery life and all the features like a big screen, fast charging they want a camera with High-quality zooming, a fast chipset, and seamless display and a device which looks chic.

Oppo has always been a company that brings customers unique features at the most affordable prices. Take a quick look at Oppo f19, it is a device that offers every feature that you want at an affordable price.

It has a punch-hole display and a triple camera set up on the back.

The phone comes in two colour variants one is midnight blue which has an icy blue gradient another one is prism black which gazes into the depths of futuristic black hue which draws everyone’s attention.

The design is efficient flashy and modern

The Oppo f19 has an AMOLED FHD+ punch-hole display of 16.34 cm, with a resolution of 2400X1080. It has a pixel density of 409PPI. It has a screen-to-body ratio of about 90.8% providing a more excellent, exquisite, and immersive experience. A border with 1.60MM. It also comes with a peak brightness of 600 nits which continuously adapts to the level that is gentle for your eyes. It has a refresh rate of 60Hz, a touch sampling rate of 135 Hz in normal mode, and 180Hz in game mode. It also has a contrast ratio of 100000:1. It comes with an in-display fingerprint and face unlock which rapidly and accurately scans your finger instantly unlocks the phone.

The chipset used here is the Qualcomm snapdragon 662 which has a CPU speed up to 2 GHz. the CPU core is octa-core and the GPU model are Qualcomm Adreno GPU 610 at 950MHz

The chipset comes with the assistance of six GB of RAM and 128 GB of RAM, which does not let you settle for anything slow. You can enjoy the memory and smooth performance. When you’re playing a game, you can switch on focus mode, it blocks out the world and lets you concentrate on winning first place while scrolling bullet notifications on the top keeping the distractions to a minimum.

The ColorOS 11.1 has some new features like app lock that helps you maintain privacy when you hand your phone to someone, keeping your confidential files and information safe.

It has a feature called private safe cloud sync that lets you access your personal files in private from any device ensuring to keep them out of reach of other people.

They also have an all-scenario SOS which has a variety of emergency tools that lets you use them just by tapping the power button several times.

Now here comes the most amazing part of this device the battery goes low battery I’ll always make your life more miserable sure oppo brings to you a whopping 5000 mA battery that keeps you in the action all day.

They also give you a flash charger of 33W which lets you charge your phone to 54% in just 30 minutes. The device also has a smart feature called AI night charge, that adapts to sleeping patterns so it pauses the charge at 80% battery and then continues the charging 100% just before you wake up so it saves you from the anxiety of overcharging your phone. So every day you wake up to a phone which is 100%, without any fear.

This phone comes with a triple camera set up where the power of three cameras helps you take better pictures .the first camera the main camera is 48 megapixels with an aperture of F/1.7, FOV 79°; 6Plens, with autofocus. Our second camera is a depth camera of 2 megapixels with an aperture of F/2.4, FOV 89°, 3P lens, and focus which helps us take brilliant portraits. The third camera is a 2-megapixel micro camera of aperture F/2.4; FOV 89°; 3P lens used to take pictures of tiny objects from flowers to food. 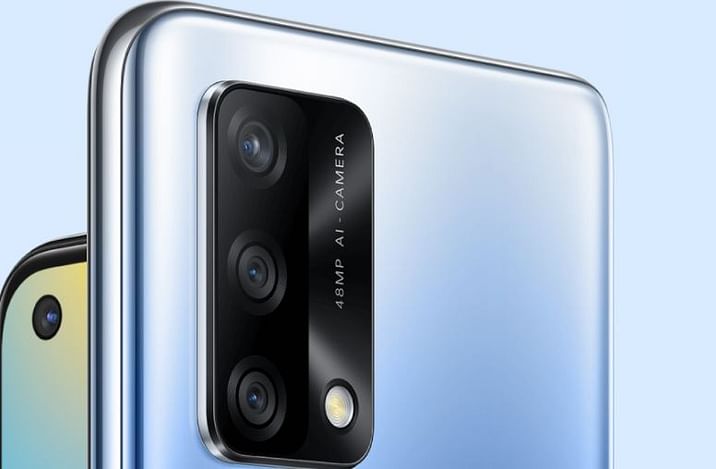 Yes, it has fingerprint sensor. One can quickly unlock our phone using this important feature.

Q. What are some of the best alternatives available for OPPO F19 in the market?

Q. What are all available bands for OPPO F19 ?

Q. What are different color options available for OPPO F19 ?

Phone having a 3.5mm jack helps to connect to multiple external devices such as headphone, speakers. OPPO F19 has headphone jack.