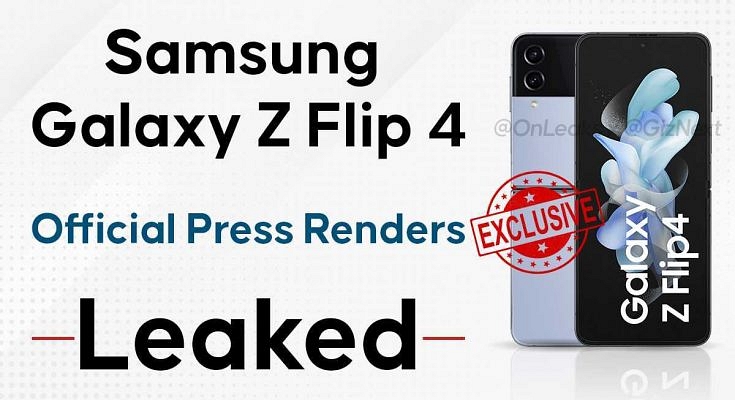 Samsung is hosting its Galaxy Unpacked Event 2022 next month. The South Korean tech giant has scheduled the launch event on August 10 where it is expected to introduce the new-generation foldable smartphones including the Galaxy Z Fold 4 and the Galaxy Z Flip 4. We are also expecting the company to release the new version of its flagship smartwatch called the Galaxy Watch 5 series and also the latest TWS earbuds dubbed the Galaxy Buds 2 Pro.

The new-age foldable flagship smartphones are taking the primary center stage at the Galaxy Unpacked Event 2022. With just a few weeks remaining for the official launch, the internet is getting flooded with details related to both the Galaxy Z Fold 4 and the Galaxy Z Flip 4. Contributing to all the leaks is Giznext’s latest exclusive report where we can confirm the exact color variants and the entire design language of the Galaxy Z Flip 4. Take a look:

Giznext has once again collaborated with noted tipster Steve Hemmerstoffer @onleaks to reveal the Galaxy Z Flip 4’s official press renders. The render images shared by the tipster show the complete design language of the next Galaxy foldable phone along with the color options. The Galaxy Z Flip 4 will feature the same clamshell foldable design as the previous generation model, i.e., the Galaxy Z Flip 3.

It flaunts the same centrally folding design but a new camera module. The vertical camera strip is placed in the outer top of the handset and painted in black. This adds to a dual-tone effect with design. The outer camera module is seen with two large sensors.

The right panel of the Galaxy Z Flip 4 can be seen housing the volume keys along with another key (likely dedicated digital Assistant), while the SIM card tray is placed on the left. The bottom panel has the USB Type-C port along with the speaker grille.

Coming to the color option, our source has suggested as many as four different color options including black, golden, purple, and light blue. These color options are likely to be called Graphite, Pink Gold, Bora Purple, and Blue.

As per the recent reports, the Samsung Galaxy Z Flip 4 will be available in three different models including 8GB+ 128GB, 8GB+ 256GB, and 8GB RAM+ 512GB storage options.

The software version could be Android 12 OS topped with a custom One UI interface. The configuration expected is up to 8GB RAM and 512GB storage configuration. The rumors have also suggested a total of three cameras on the Galaxy Z Flip 4. The rear camera module is speculated to ship with dual 12MP sensors, while for selfies, the front camera is said to measure 10MP. The display and battery details are at large at the moment, but we are expecting some more details ahead of the Galaxy Unpacked event 2022.