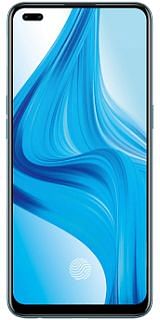 The F17 Pro has a subtle design that will entice you right away. All seems to be in a complete aesthetic order on this smartphone. It has a matte layer at the back, which prevents traces of fingerprints from the surface. The placement of the cameras, on the other hand, is striking. Instead of standing straight, the four cameras are boxed in a square giving them a new look.

Most smartphones today have decent displays, and the one on the F17 Pro is no exception. The Oppo F7 Pro has got a 6.4-inch 1080p AMOLED screen.  It is capable of emitting dynamic colours. It seems to be a pleasure to watch films and videos on the big screen, and the bouncing hole is no obstacle. Except for gaming, the screen has enough room for all of the elements to be easily visible.

I think the chin at the bottom should have been a little thinner. The lack of a 90Hz refresh rate, however, is a major problem. Even a phone costing Rs 13k has it, but the F17 Pro appears to be outdated because it lacks an essential feature that should be important to you in 2021.

Big screen ideal for all media

The majority of today’s mid-range smartphones are perfectly capable of performing daily tasks. These days, you don’t have to wait for applications to launch or worry about multitasking. For less than 20,000 rupees, you can get a powerful processor like the Snapdragon 720G used in Realme and Redmi phones. The MediaTek Helio P95 that powers the F17 Pro is one that I tried out on an Oppo phone a few months ago and wasn’t too impressed with.

As previously said, the Helio P95 excels at multitasking & handling daily apps. I didn’t note any pause or stuttering.

Next, let me discuss photography. However, camera processing is a little sluggish. For example, it takes a few seconds to process the picture when you use Ultra Night to take a picture.
ColorOS 7.2, which is based on Android 10, is installed on the Oppo F17. It uses an air gesture to make or deny a call based on your clenched fingers’ pattern. Unlike Pixel 4, the F17 Pro detects motion with a standard proximity sensor, which is suitable for the restricted use of air gestures.

I enjoyed using this new feature to pick up or reject calls, but I wouldn’t depend on it for very long. It’s a nice feature that you’ll probably use at first but then forget about. For the time being, the air gestures only work with calls; however, Oppo will add more features in the future.
In my research, the processor performed well only with low- and medium-quality games, so don’t expect intense gaming from it. After 15 to 20 minutes, the F17 Pro started to warm up, but its effect was mitigated by polycarbonate

The F17 Pro’s battery life is fine, and even if it falls short of your standards, the 30W quick charging helps. It takes between 50-55 minutes to charge the 4000 mAh battery fully..

If you need to get something done quickly and your phone’s battery is flat, a 10-minute charge will keep you going for two to three hours. A 20-minute gaming session depletes around 8%-9% of the battery, which would otherwise last a day under normal conditions

Though the battery is not that powerful, quick charging is a big relief.

Oppo’s cameras are outstanding, regardless of the phone’s price. The back of the F17 Pro has four, and the front has got two cameras.

On the rear side, there are:

On the front, there are two cameras:

• A 16-megapixel main camera; and
• A 2-megapixel secondary camera.

The F17 Pro’s main camera, which autofocuses on subjects quickly in daylight, produces some impressive and well-detailed images. They have a strong dynamic range and retain natural colours. This means that even if your subject is between your camera and a light source, it will have enough brightness to highlight the details. The cameras have a zoom range of up to 10X, with 2X being optical.

The portrait shots taken with the F17 Pro camera are acceptable but not particularly noteworthy. The edges of the in-focus subject are often blurry, and the images are heavily smoothed. Those images have no density, but they’re decent enough to share on Instagram and Facebook. Both the front and rear cameras produce identical portrait shots.The front cameras, on the other hand, would cater to you because of their attractiveness. Now, this make-up is just too fake, and when used, it makes you look like a glammed-up version of yourself. Turning off the filter can not make much of a difference if you prefer natural tones. As a result, it’s as though you’re compelled to see yourself as glamorous.

4 Cameras in the back and 2 cameras in front produces realistic pictures.

Q. What is the price of Oppo F17 Pro in Bangladesh?

Q. What are the top features/key specs of Oppo F17 Pro?

Q. What kind of Display Panel is used on Oppo F17 Pro in Bangladesh?

Q. What are the Camera Specs of Oppo F17 Pro?

Q. What is the display size of Oppo F17 Pro?

Q. What are some of the best alternatives available for Oppo F17 Pro?