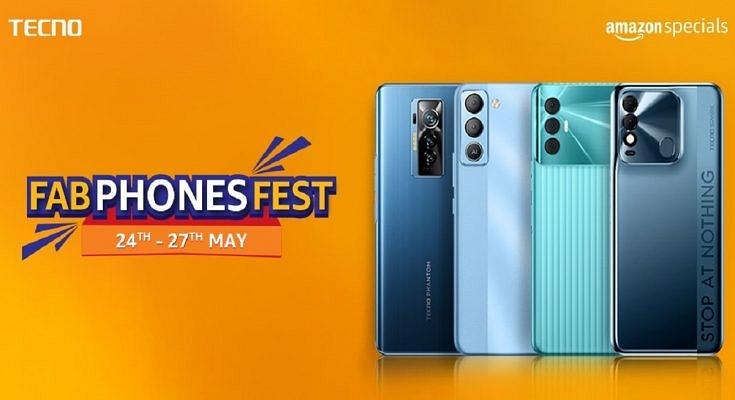 The Fab Phones Fest sale has been announced by Amazon India. The new sale brings together a host of deals and offers on a range of the latest Tecno smartphones such as Pop 5 LTE, Spark 8T, and Spark 8 Pro. The newly launched Tecno PhantomX is also available at the ongoing virtual buying fest. Buyers can enjoy up to 40 percent off on top-selling Tecno smartphones. They would also get an additional 10 percent off while using HDFC Bank cards. The Amazon Fab Phones Fest sale will go live from 24 May up until 27 May 2022.

The Pop 5 LTE is a trendy smartphone from Tecno. It flaunts a 6.52-inch high-definition display offering a resolution of 720 x 1560 pixels. The smartphone is powered by an octa-core Unisoc SC9863A processor and packs 2GB of RAM and 32GB of storage. It further runs Android 10 (Go edition) and boasts a 5,000mAh battery. As for cameras, the phone sports an 8MP primary sensor and a 2MP lens on the rear. It has a single 5MP sensor on the front for selfies. During the Fab Phones Fest sale, the Tecno Pop 5 LTE will be available for Rs. 6,599.

The Tecno Spark 8T comes with a 6.6-inch FHD+ display with 1080 x 2408 pixels resolution. The phone is powered by the MediaTek Helio G35 SoC. It is equipped with 4GB of RAM and 64GB of internal storage that can be expanded through a microSD card. As for cameras, the Spart 8T features a 50MP primary sensor and an AI secondary sensor. It sports an 8MP front-facing camera for selfies and video chats. Besides, there is a 5,000mAh battery with 10W standard charging support. The Tecno Spark 8T can be purchased at Rs. 8,999 during the Fab Phones Fest offer.

The Tecno Spark 8 Pro sports a 6.8-inch IPS LCD display. It has the MediaTek Helio G85 processor under the hood. The phone comes with 6GB of RAM and 128GB of storage configurations. On the rear, the phone packs a triple camera setup featuring a 48MP primary camera and a 2MP lens. It has a single front camera setup for selfies featuring an 8MP sensor. The Tecno Spark 8C will be available for sale at Rs. 9,699 on Amazon Fab Fest Sale.

The Tecno Phantom X comes with a 6.7-inch AMOLED display that has a screen resolution of 1080 x 2340 pixels. It uses the MediaTek Helio G95 chipset under the hood. For storage, the smartphone has 8GB RAM and 256GB internal memory. It also has 5GB of virtual RAM. As for optics, the Tecno PhantomX comes with a dual-camera setup on the rear that has 50MP + 13MP + 8MP sensors. On the front, the phone features a 48MP and an 8MP camera for selfies and video calls. The Tecno Phantom X is now available for purchase at Rs. 25,999 on Amazon India.