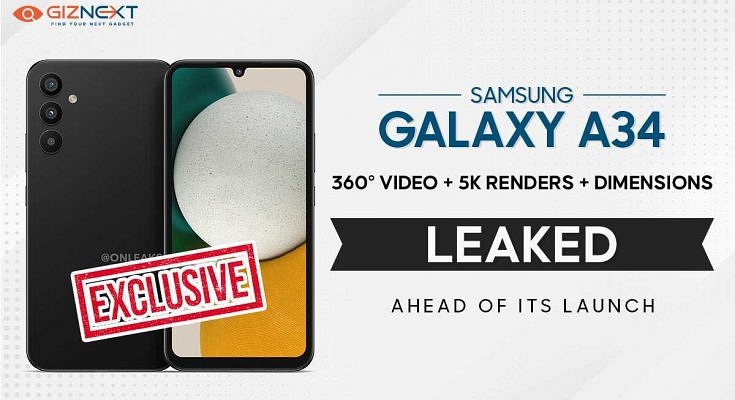 This time as well, Giznext has teamed up with tipster @Onleaks for the Galaxy A34’s exclusive 5K renders, 360-degree video, and specifications. The renders we received show the design language of the next Galaxy A series from all angles. For a change, we will see a flat frame design on a budget Samsung phone. However, the handset still retains some curves at the edges and is not an entirely flat frame.

Up front, the Galaxy A34 like the recently leaked Galaxy A14 features a waterdrop notch for the selfie camera. The bezels are trimmed giving making room for some extra screen space on the Infinity-U panel. The chin is slightly thicker compared to the remaining bezels but isn’t as large as previous generation models.

Speaking of the remaining design elements, the Samsung Galaxy A34’s right spine packs both volume rockers and the power key. It seems the power button will have the physical fingerprint scanner integrated for biometrics. At the bottom, the USB Type-C port along with a 3,5mm headphone jack and mic can be seen, whereas, the SIM card tray is positioned at the top this time.

The fresh lot of leaked Galaxy A34 5K renders and 360-degree video we received have confirmed a single black color option. However, Samsung will launch other color variants as well. The back panel appears gradient. Also, three camera sensors are stacked vertically on the top left of the back panel along with the LED flash. The Samsung badging is inscribed at the bottom. Samsung has definitely improved the design language with this Galaxy A series phone over the last generation models.

Going by the information provided by the tipster, the Galaxy A34 will measure 161.3 x 77.7 x 8.2mm in dimensions. The Infinity U-panel is said to be of 6.5-inches, however, the panel type and resolution is not tipped just yet. We are expecting Samsung to use a sAMOLED panel as its predecessor, i.e., the Galaxy A33 5G.

Speaking of which, we are not sure if this model will come with 5G network support or just 4G. We are expecting the former since 5G phones are becoming a new norm. Additionally, a triple rear camera with a flash is confirmed on the Galaxy A34 5G by our source and the 5K renders.

Also Read: Samsung Phone Sensors Secret Codes: What Is It And How To Check?

The Galaxy A34 launch timeline is a mystery. Since this phone is comparatively new at the rumor mill, it is unlikely to make a debut by this year. We can expect Samsung to launch the Galaxy A34 possibly in the first half of 2023 in India and other markets. As for the pricing, it is also kept under wraps as the launch timeline. However, our speculation is under Rs. 30,000 price range. We will keep a tap on all the details and will keep you posted.