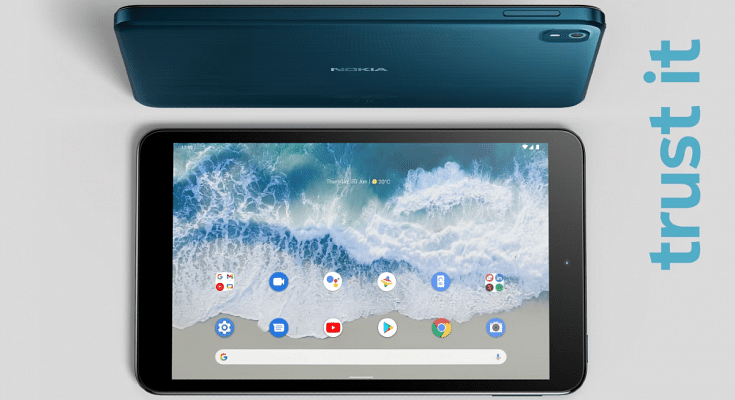 Will be available for sale via Amazon

The Nokia T10 tablet is likely getting launched during the festive season sale on one of the largest e-commerce players in the Indian market. The tablet has been spotted on the Amazon Great Indian Festival sale’s offer page listing. Nokia Power User first spotted the listing. The report doesn’t reveal the exact launch date, however, the product page listing is a confirmation of its imminent launch in the country.

Going by the report, the Nokia T10 tablet would be a budget offering that will be priced at Rs. 11,999 in the country. This pricing leak seems authentic since it has been spotted on the Amazon Great Indian Festival sale offers page.

With this price tag, the Nokia T10 would arrive as one of the cheapest Android tablets in India that will be competing against the likes of the Realme Pad Mini and the Moto Tab G20 tablets. HMD Global could soon reveal the exact launch date for the Nokia T10 sometime soon. The expected availability is on the official Nokia India website along with Amazon.

The Nokia T10 is an entry-segment Android tablet that runs on the Unisoc T606 processor. It is worth mentioning that the Nokia T20, the older sibling of the T10 also uses an octa-core Unisoc processor for power delivery and retails below the Rs. 15,000 price mark.

The Nokia T10 will be available in both Wi-Fi and Wi-Fi+ LTE variants. The device will ship with Android 12 OS and will offer a stock UI experience along with a promised three years of update cycle. Additionally, the Nokia T10 will flaunt an 8-inch display panel that will support a standard HD+ resolution.

The front panel will house a small 2MP camera for selfies and video calling, while at the rear there will be a single 8MP snapper for primary photography. The Nokia T10 will be featuring a USB Type-C port for charging and data transfers and will also integrate a 3.5mm headphone jack. The budget tablet will employ a 5,100 mAh battery to keep the lights on that will be supported by a standard 10W charging.