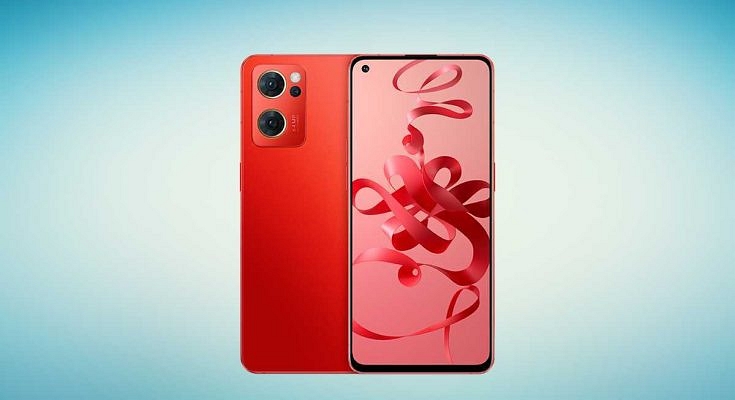 Oppo has been making headlines with its new premium mid-range Reno7 series. The brand has unveiled the Reno7 Pro and the Reno7 SE alongside the vanilla Reno7 in China. A special edition variant namely Reno7 Pro League Of Legends was also added to the new series. Now, the company has thrown in another new edition in the mix. But this time it’s a limited edition of the vanilla Reno7. Called Reno7 New Year Edition, the latest model brings a new skin but identical hardware as the standard model.

The Oppo Reno7 New Year Edition has been launched in China to mark the celebrations of the coming 2022. The USP of this special edition Reno7 is the Red Velvet shade. In fact, the device itself offers a velvet texture unlike the traditional matte or glossy feel you get on most of the mid-range and premium smartphones. The camera module at the back panel is wrapped with a golden lining which isn’t present on the standard model.

The additional design highlight on the Reno7 New Year Edition is the tiger logo placed alongside the Oppo labeling. This symbolizes the Year of the Tiger (2022) for the Chinese population. The new special edition will be up for pre-registrations starting December 27 in China.

The company hasn’t confirmed the sale dates but it should soon follow. The global availability of this device is however uncertain; especially for the Indian market. We speculate this basis the fact that this is a Ney Year Edition and the company plans to launch this handset once the celebrations are over in the country.

Oppo Reno7 Specifications: Are There Any Changes?

The answer is no, The Oppo Reno7 New Year edition is announced with the same set of internals as the standard Reno7. You’ll get an AMOLED display measuring 6.43-inches with 1080p FHD+ screen resolution and a higher 90Hz refresh rate. The optics at the back will comprise a 64MP primary camera paired up with an 8MP ultrawide angle sensor and a 2MP macro sensor.

The display sports a punch-hole cutout that stores a 32MP camera for selfies and video calling and has an f/2.0 aperture. The device offers an in-display fingerprint scanner and ships with Android 11 OS wrapped around ColorOS 12 UI.

This special edition model is equipped with the same mid-range Snapdragon 778G game-centric processor. Configurations available would be up to 12GB RAM and 256GB storage. Lastly, a 4,500 mAh battery with quick charging support will keep the lights on.