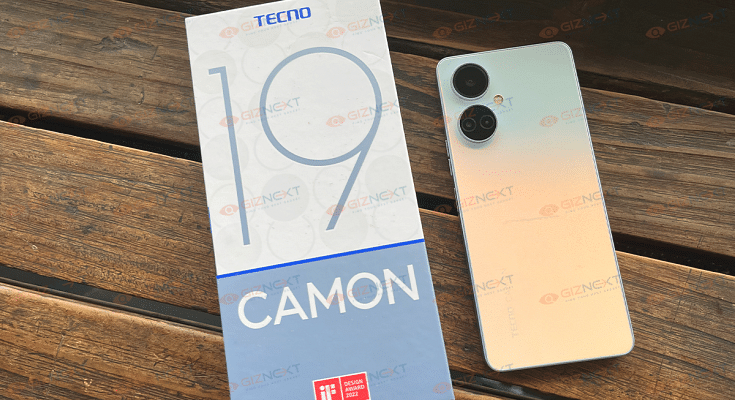 Lately, Tecno has been dominating the competition in the mid-range market. With an emphasis on selfie cameras and large screens, the Shenzhen-based phone maker established a recognizable brand over time by releasing affordable smartphones. The Camon 19, the latest smartphone by the brand, follows the same path. In India, the phone is available for Rs. 14,999.

Since we have been testing the product for the past week, it is difficult to find many faults at this pricing point. The Camon series places a lot of attention on the camera, but there has also been a definite advance in design, battery life, and display. Let’s get to know if the phone justifies its price tag or not:

What’s Inside The Box?

The Tecno Camon 19 has a beautiful design. It has a boxy shape with a matte-like finish with a twin camera setup at the back. The device has a solid body and is made of polycarbonate. The phone is comfortable to carry in the hand despite having a huge display. Most likely because it isn’t overly tall and wide – just the correct size for operating it single-handedly.

The Camon 19 is available in Eco Black, Sea Salt White, and Digital Green color options. The Sea Salt White variant is what we’re using. A combination of thin frames and a small camera cutout in the top center of the screen – is a classic design choice for the market.

On the right, there is the volume rocker and a side-mounted fingerprint scanner which also doubles as the power button. It seems like the new trend in rear-mounted is side mounting. It is there on every smartphone manufactured today. The fingerprint reader is significantly simpler to use and, during our time there, always worked quickly and accurately.

The dual nano-SIM card tray sits on the left while you have the USB C charging port, headphone jack, speaker grill, and dual microphones at the top and bottom. The stereo effect produced by the phones using the earpiece and a downward-firing speaker is suitable for casual listening.

Coming to the back, the circular holes with cameras are present in the upper left corner and the flash is situated between them, somewhat to the right of the center. It’s wonderful that they don’t detract from the aesthetic because you can only see the vertical glossy inscription TECNO CAMON in the lower left corner. Overall, we found the design of the Tecno Camon 19 quite impressive.

The Tecno Camon 19 sports a large 6.8-inch IPS LCD with Full HD+ resolution. The aspect ratio is 20.5:9, which is a little out of the ordinary, and the pixel density is roughly 395 PPI. At the same time, the refresh rate is typically 60Hz. The screen is also certified by TÜV Rheinland, which indicates that it emits less blue light, which is good for the user’s eyes.

Even while the smartphone’s display doesn’t have any distinct features, such as a fast refresh rate, it still has a decent display. The display has rich colors and adequate contrast, especially for an IPS panel. Those who appreciate vivid colors will be catered to by the screen.

Although the maximum brightness cannot be described as outstanding, it is sufficient to use the smartphone on a bright day outside. In most cases, it will be sufficient, however, it could be higher. Normal viewing angles result in slightly warmer colors with linear deviations and slightly less contrast for dark tones, which is typical for IPS, with diagonal deviations.

The screen provided a large canvas for multimedia content consumption, including playing games, browsing websites, and watching movies. The Tecno Camon 19 certainly looked the part of a high-end smartphone and was a pleasure to use.

The Tecno Camon 19 is a decent performer. Under the hood, the phone comes equipped with MediaTek’s Helio G85 processor and Mali-G52 GPU paired with 6GB of RAM and 128GB of storage. You also get up to 3GB of virtual RAM with MemFusion tech.

We achieve the usual average level of performance in tandem with the Mali-G52 MC2 video accelerator. The Tecno Camon 19 in 6GB / 128 GB configuration performs decently in everyday use. The smartphone responds to all user demands quickly and apps launch swiftly.

You get HiOS 8.6.0 and Android 12 on the phone. HiOS 8.6.0 carries on the Tecno brand’s ethereal, fluid, and smart brand aesthetics with new features and an improved user interface.

In everyday use, the device is smooth and runs decently. For common apps and games, the performance is more than adequate. It chugged along just fine without any hiccups; you just need to crank down the graphic settings while playing demanding games. Besides, the bloatware is pointless and you can easily disable or uninstall most of the apps.

Tecno always does its best to bring a phone with good cameras. The Camon 19 has three rear cameras: a wide-angle module, a bokeh depth sensor, and an AI module. The phone comes equipped with dual 64MP primary rear cameras.

Photos in standard resolution seem nicer on a clear, sunny day because of enhanced clarity and detail. The scenario will be different in a room with poor lighting, though. The images are crisp and have a nearly identical amount of digital noise at full resolution. Under any ambient conditions, there is essentially no difference in how the two modes depict colors.

With the right level of lighting, the phone is capable of taking good quality pictures with correct colors and a normal level of detail. In complex scenes, Auto HDR works and extracts more information from different areas, but it’s hit and miss. In some cases, this makes the image look unnatural.

If there is a need for shooting at night, then you can turn the night mode on. It will also cope better with light and add more details.

Coming to the selfie camera, the device has a 16MP sensor on the front. The color rendition is normal and natural. Besides, video is recorded at a maximum resolution of 2K at 30fps. On the other side, there is no jelly effect during swift movements.

Apart from the usual modes such as beauty, Portrait, and super night – you also get a new fun AR Shot that lets you create memoji and animoji characters and share them with friends.

The Tecno Camon 19 has a 5,000mAh battery which is quite normal by today’s standards. Considering the general specifications, you can have at least one day of active usage here. However, it can last a day and a half to two days on a single charge in gentler usage modes. As always, it all depends on the specific application scenario.

The smartphone comes with an 18W power adapter that supports fast charging. However, in practice, the loading speeds are unimpressive, to say the least. According to our measurements, charging from 20 percent to 100 percent took over two hours. Not so fast charging, we would even say slow, by modern standards.

The Tecno Camon 19 is a mid-range smartphone with a stylish and elegant design. In addition to its unique appearance, it has a good IPS display, decent performance for daily use, a lot of memory, a good camera, and huge battery life.

However, there are a few areas where the maker of this smartphone could make improvements. Like the charging can be done more quickly because many manufacturers are currently focusing on 25W and stronger chargers, although the 18W we have here is not that quick. Overall, you will be receiving a lot of value for your money.