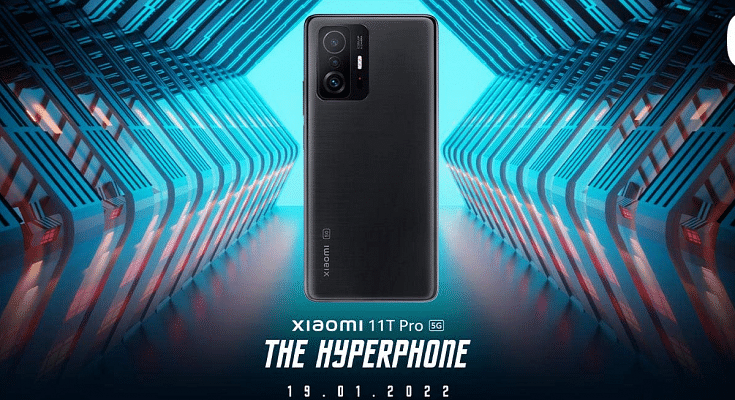 During the Xiaomi 11i series announcement in India, the company had announced the Xiaomi HyperPhone for the country. Later, the brand shared an official teaser confirming the upcoming handset to be the Xiaomi 11T Pro. The official launch is slated for January 19 in the country. Previously, the brand had created a dedicated microsite on its official website and had updated a few of the key features. Now, another fresh microsite has been created at an e-commerce platform confirming its online availability.

The Xiaomi 11T Pro aka Xiaomi HypePhone will be available for sale via Amazon in India. The e-commerce portal has also created a dedicated microsite for the upcoming Xiaomi premium range phone. Similar to Xiaomi’s official microsite, the Amazon page also confirms the January 19 launch date along with some of the specifications.

The ‘Notify Me’ page is also live on Amazon which you can click to get all the latest updates on the upcoming Xiaomi 11T Pro. Unfortunately, the pricing details are at large. None of the leaks or the official sources have tipped the Xiaomi 11T Pro’s pricing. Whether this handset will retail under Rs. 50,000 or Rs. 40,000 remains to be seen.

Amongst the officially teased features (via official microsite and Amazon listing) are a 10-bit AMOLED display with 120Hz screen resolution and a punch-hole design. The panel will have Dolby Vision support. The panel size would be 6.67-inches and the resolution supported would be 1080p FHD+. The other features are also known since this flagship model has made its debut back in November 2021 alongside the Xiaomi 11T.

Speaking of which, we will see the same Snapdragon 888 octa-core processor powering the Xiaomi 11T Pro in India. The chipset will be combined with up to 12GB RAM and 256GB native storage capacity. It will be shipped with Android 12 OS which will have a custom MIUI 13 skin on top.

The Xiaomi 11T Pro’s imaging setup comprises a 108MP main camera which is combined with an 8MP sensor for an ultra-wide-angle sensor, and an additional telephoto sensor. The selfies are clicked by a 16MP camera that has an f/2.0 aperture. This unit is driven by a 5,000 mAh battery with 120W fast charging support.