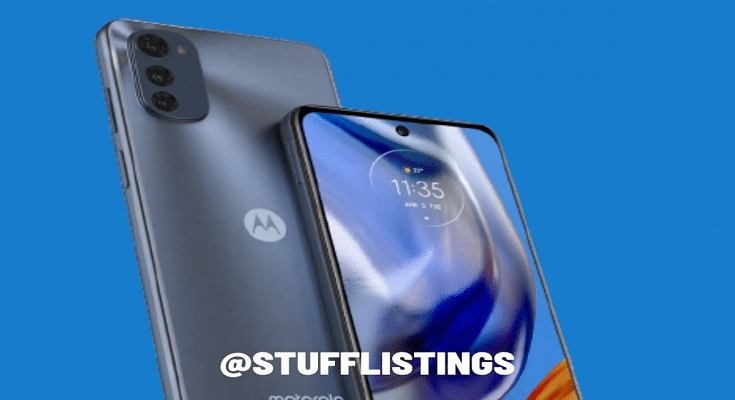 Motorola is currently grabbing all the headlines for its upcoming 200MP camera phone. The brand’s first flagship camera handset is already confirmed to launch sometime in July this year. Meanwhile, the Lenovo-backed brand is also working on revamping its budget Moto E series in India soon. The Moto E32s is the upcoming affordable Motorola handset that will be introduced in the country this month itself. A fresh leak has just surfaced detailing the entire design as well as the spec sheet of the Moto E32 in India.

The Motorola Moto E32s is arriving as the newest budget Android phone in India by the Lenovo-owned brand. A tweet shared by noted tipster Mukul Sharma reveals the full design as well as the display specifications of the Moto E32s. The upcoming Moto E series phone seems to flaunt an identical design to the standard Moto E32. The Moto E32s leaked render images show a tall front panel with a narrow bezel profile. The chin bezel is slightly thick compared to the rest of the corners.

The Moto E32s will feature a punch-hole camera cutout positioned at the center-top of the panel. The back panel of the Moto E32s has gradient skin in a greyish tone. As per the tipster, this is the Moto E32s’ Slate Gray color variant. The budget Moto E series phone is further seen with a vertical camera island on the upper left of the back panel. The iconic Moto “M” logo is inscribed at the center of the rear panel.

It isn’t clear from the leaked renders if the Moto E32s will have a rear or side-mounted fingerprint scanner for security. It will be clear once the device is announced officially in the Indian market. The Moto E32’s side panel can be further seen mounting the power and the volume keys on the right spine, while the SIM card tray is visible on the left panel. The bottom panel seems to pack a USB Type-C port along with a 3.5mm headphone jack and the speaker grille.

The tipster has also revealed some of the key specifications of the next Motorola budget Android phone. The Moto E32s is said to ship with a 6.5-inch display. It will be an IPS LCD screen that will support a 90Hz refresh rate. It is currently not known if the panel will feature an HD+ or FHD+ screen resolution. That’s all the info the rumor mill has on the upcoming Moto E32s. We will keep you posted with the remaining updates.

When Is Moto E32s India Launch?

The Motorola Moto E32s is expected to go, official, later this month. As per the recent leaks, the device will be launched on May 27 in the Indian market. The pricing details are also at large. However, we might see a sub Rs. 10,000 or Rs. 15,000 price label for the upcoming Moto E series phone.